Indigenous occupants of the land preceded European settlers.Though a small number of indigenous people were in the area in the early years of settlement, most had disappeared by the time the first settlers arrived. Both Jagera and Turrbal aboriginal groups claim early association with the Centenary Suburbs area.

1823-4: First known European contact with the area occurred when the shipwrecked former convicts, Parsons, Pamphlett and Finnigan travelled upriver in 1823, followed by the surveyor and explorer John Oxley later the same year. Oxley made another trip the following year.  In 1823, he named Mermaid Reach, charted the Seventeen-mile Rocks, and landed at and climbed Mt Ommaney which he named Green Hills. The Mermaid Reach of the Brisbane River, which forms a northern boundary of the Centenary Suburbs, is named for Oxley’s boat the Mermaid.

1852-1862: Earliest known land usage by Europeans: Stephen Simpson and Thomas Boyland each established grazing properties on land leased from the Government. These extended over a considerable part of Centenary Suburbs. Neither Boyland nor Simpson lived in the area, though Stephen Simpson had commenced building Wolston House, south of Wolston Creek, after June 1852 and lived there from approximately late 1854.

1863 onwards: Landownership and settlement period: As a result of the Government surveying the land and auctioning it as freehold in 1863 and 1864, all of the land between Fort Road, Oxley and Wolston Creek became privately owned. From this time, the second proprietor of Wolston Estate, Matthew Buscall Goggs, purchased and continued grazing activities on lands in the southern and western part of Centenary Suburbs (that is Riverhills, Westlake, Middle Park, Jamboree Heights, and Sumner Park): see Map of Gogg’s Land.

A mausoleum originally intended for family burials was erected by Matthew Goggs in 1871 but it fell into disrepair and eventually disappeared until the rediscovery of the site in 2010. Read more about the Goggs mausoleum and the location of the site.

Further information about the 19th century history of the Wolston grazing property, and about Stephen Simpson and the Goggs families, can be found in our book Pastoralists of Brisbane Town’s Fringe.

After the October 1864 Crown land sales, small-scale agricultural farms were established in the more northerly parts of the area (Jindalee, Mt. Ommaney, Seventeen Mile Rocks, and Sinnamon Park including Windermere Estate). This brought the first residents to the Centenary Suburbs area (ie the area on the north side of Wolston Creek). This part of the district was known as Seventeen Mile Rocks  (later more frequently spelt 17 Mile Rocks).

The early farming community was comprised mainly of Irish Protestants and Germans, with a few Irish Catholic and English families also being present. Seven pioneer families continued to own and work land well into the 20th century: Belz, Henry, Magee, Maurer, Oldfield, Sinnamon and Wolf. Read more about 19th century pioneers, particularly those who still had strong links with the area in the 20th century.

1865-1888: Development of community institutions and buildings for public use:The settlers were quick to arrange church services by various denominations, most with visiting ministers and preachers. Very early locally based institutions were the Orange Lodge (early 1865), the Seventeen Mile Rocks branch of the Bible Christian Church (services from 1866, local committee 1869), and the Band of Hope (established by 1872). The Bible Christian Church building was opened in July 1869. A Provisional School opened in this building in April 1870. The Orange Lodge hall, opened in 1871, was also used for church services.

Transport: For approximately the first twenty years of settlement, with road construction being low in Government priorities, the river provided the main means of transport. Farmers used punt-style rowing boats to take their goods to market in Brisbane and Ipswich. After the Ipswich-Brisbane rail link was built in 1875, residents pressed for improvements to be made to local roads in order to convey produce to market. Horse-drawn transport gradually replaced the rowing boats. From the 1920s, some farmers acquired motor vehicles but horse-drawn transport continued to be the common mode of transport for a long time. There was no public transport to the area prior to suburban development. 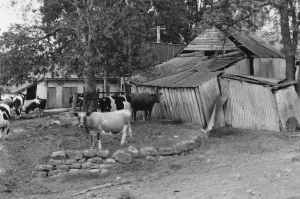 Land usage: Over time, the primarily agricultural enterprises moved to mixed farming, particularly horse breeding and dairying.  There was also some pig breeding. A few farmers experimented with growing grapes and making wine. For several years in the late 1880s-early 1890s, a rum distillery operated in the area. During the first half of the 20th century, most of the area comprised dairy farms, with a few exceptions that still engaged in agriculture or mixed farming.

With improvement in roads, increased availability of rail transport and of motor cars, the 20th century brought more ‘gentleman farmers’ to the area – owners who held farms and lived in the area but had another, primary means of income generation.

See our local history book When River Was Roadway for more information on the above aspects of pioneer history and lifestyles.

Although the area remained primarily a farming district, several locally based industries emerged in the 20th century pre-suburban period. These included: Garnet Rock Quarry on the riverbank at Mt Ommaney (1924-1931 approximately); the Queensland Cement and Lime coral receiving wharf and plant at Seventeen Mile Rocks; a gravel dredging operation (Stirling Gravel and Sand Company) upriver from John Magee Park; the coal carriers Moreton Tug and Lighter Company upriver from the QCL wharf, and a large quarry in the Horizon Drive area that was established by Brittains Brickworks and later taken over by Boral. There were also a couple of small gravel quarries between Jindalee and Darra.

1893: floods occurred, three in succession in February. The first and the third were major floods. Though slightly lower than the 1841 flood, the 1893 flood was higher than any subsequent floods. See The 1893 Floods and Pre-Suburban 20th Century Floods.

1910: Thomas Macleod launched the first biplane glider in Queensland from the slopes of a farm then owned by Belz family. See Thomas Macleod, Aviator. 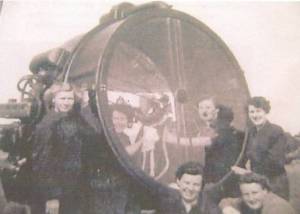 1948-1959: The Order of St Augustine, an Order of Catholic priests, had a large farm on and below the hill Mt Ommaney, originally with a view to building a boarding school for boys on the higher part. To read more about the Augustinians and the Fatima Statue, click here.

By the 1950s, postal delivery, bread delivery and grocery delivery services were available. It is not clear exactly when each of these services commenced, but for most of the pre-suburban period, residents of Seventeen Mile Rocks had to collect mail and do their household shopping at Oxley (or more distant places before Oxley was established).

1950s Brisbane – for a “snapshot” of Brisbane life in 1954, see this video from the National Film and Sound Archive.

See Map 2 for a map of the area in the pre-suburban period, overlaid on current major roads and landmarks.
Back to the top of the page